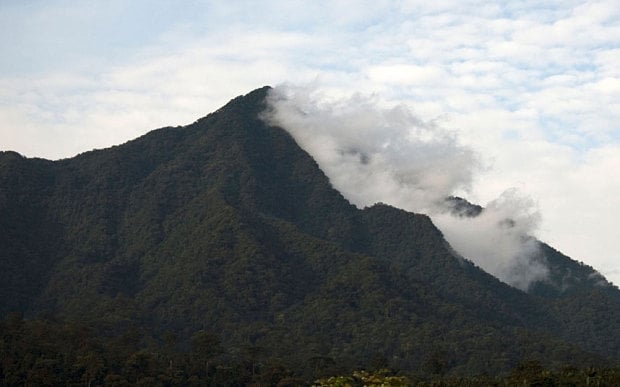 Periperi U partners based at the University of Buea, Cameroon, hosted a workshop on 12 December 2017 that centred on reducing the impacts of natural hazards and disasters posed by eruptions of Mount Cameroon, an active volcano, towards the population living on its flanks in an attempt to build local/stakeholder capacity towards disaster risk reduction.

Eruptions from Mount Cameroon have been a constant concern and a major hazard to local inhabitants of the region for thousands of years. However, despite the danger people have been drawn to the volcano due to its rich soils which support thousands of farmers. In the past the community perceived eruptions from Mount Cameroon being caused as a consequence of the anger of the god of the mountain and in the past, this god was appeased with human sacrifice. Fortunately, such practices have been stopped with a more enlightened community, and greater emphasis has been placed upon modern measures and strategies to prepare, forewarn and prevent disasters from occurring. 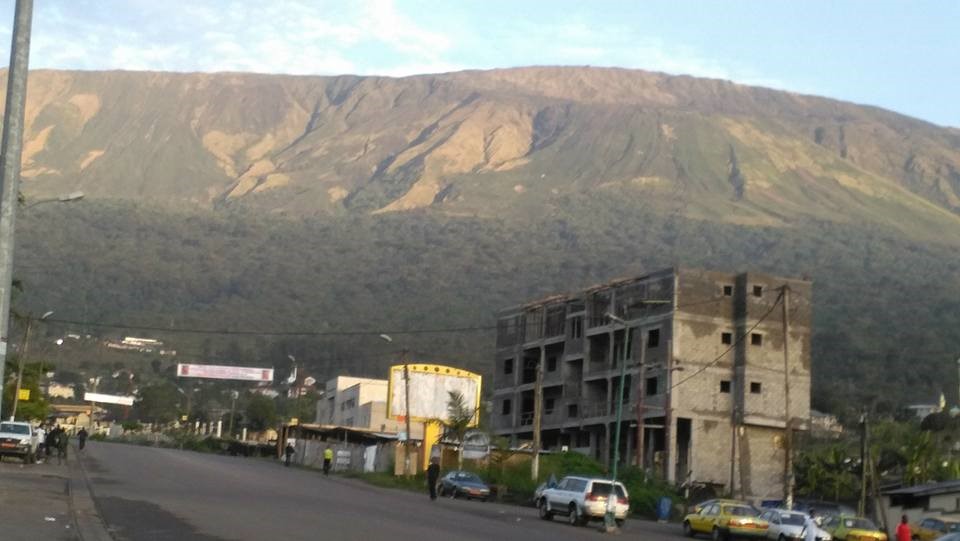 This outreach and engagement coincided with the vision of the new Vice Chancellor of UBuea which is “Engaging the University of Buea with its local community”. The workshop was attended by approximately 150 participants that comprised of a diverse range of stakeholders which included: the representative of the Governor of the South West Region, the Vice Chancellor of the University of Buea, the commander in chief of the 21st infantry of the arm forces for the South West Region, the representative of the Divisional Officer of Buea, members of the judiciary, members of the civil protection, ministries of environment, agriculture, health, forestry, public works, town planning, architecture; Buea Council, the media (8 media houses both audio-visual and print), academic and administrative staff of UBuea, postgraduate students of UBuea, traditional rulers and civil society organizations. 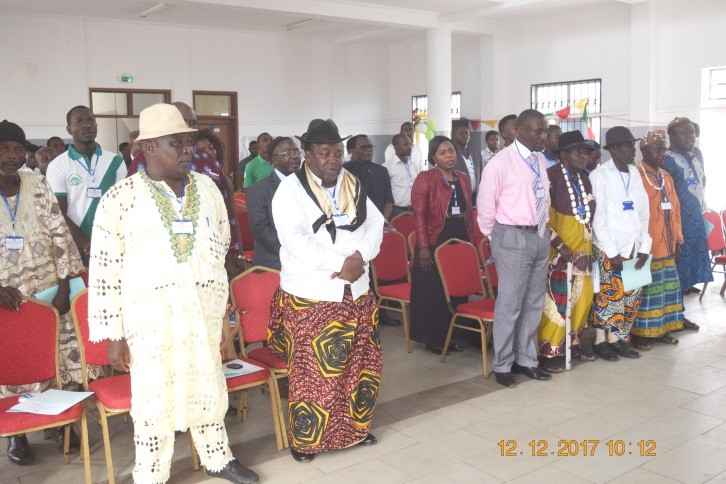 The workshop was opened by the Deputy Mayor of Buea Council and keynote address was given by the Vice Chancellor of the University of Buea Professor Ngomo Horace Manga. Short talks at the workshop were given by experts focused on: Mount Cameroon and its eruptions (Prof. Ayonghe Samuel); impacts of hazards from eruptions of Mount Cameroon (Dr Njilah Isaac from the University of Yaounde I); health impacts of volcanic products from Mount Cameroon (Dr Nde Peter Fon); existing disaster risk reduction strategies at the flanks of Mount Cameroon (Dr Asong Fred Zisuh) and lastly Dr Ebotagbo Elizabeth talked on how certain plants can be used as eruption monitoring/precursory tools.

Each of the presenters provided several recommendations to better protect communities living in the shadow of the volcano. Main arguments of the presentations focussed upon;

The working session was later divided into 5 groups discussing on the following various themes concerning the risks the volcano poses to the community and surrounds. 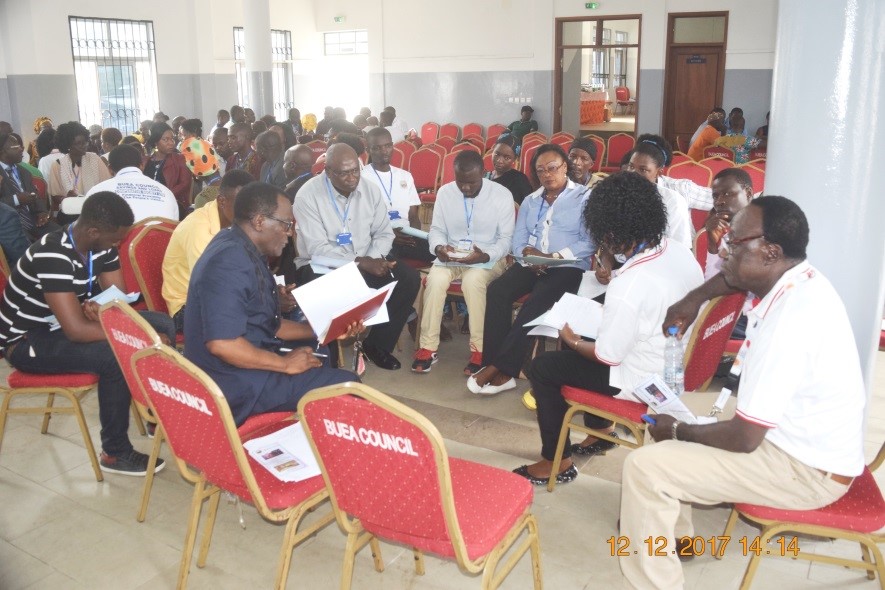 Discussions in Group 1 produced the following propositions: the installation of a crisis management committee in Buea Sub Division as a preparedness measure; installation of early warning systems; indiscriminate construction in the city and the institution of building codes and policies to back it up (cf Photo 1b); sensitization of the community; construction of more health facilities and fire brigade centres for response situations during eruptions and regular maintenance of critical infrastructures.

For Group 2, it was revealed that members of many communities continued to hold traditional perceptions that eruptions from Mount Cameroon were caused by an angered deity of the mountain. Hence such communities adopted practices such as performing traditional rites to appease the god and subdue it’s anger, construct their homes with rusted machetes believing that this would absorb shock, and even relocate themselves (sometimes temporarily) away from the mountain as part of their coping strategies.

Group 3 listed the different types of hazards that results from Mount Cameroon eruptions and citing the destruction that each poses to the community. For the socio-economic impacts of these eruptions to the population which range from fear, health hazards, agricultural loss, increase crime rate, loss of cultural value from migration for example language, mixed marriages, ritual performance, and acquisition of new cultures or adulteration of cultures and limited investment in this area.

Group 4 recommended that all stakeholders should unite and work hand in hand to mobilize funds for disaster events needed to sensitize and empower the local communities.

And finally, Group 5 recommended the education of the people living win and around the area of the volcano to assist in instilling the mind-set of disaster risk reduction within local communities.

In their words of appreciation, the mayor, some traditional chiefs and the commander of the 21st brigade of the army for the South West Region, amongst others appreciated the efforts of the UBuea PPU team in the role they played in enlightening the population about the risks from this active volcano and how the vulnerable population can put in place coping strategies. 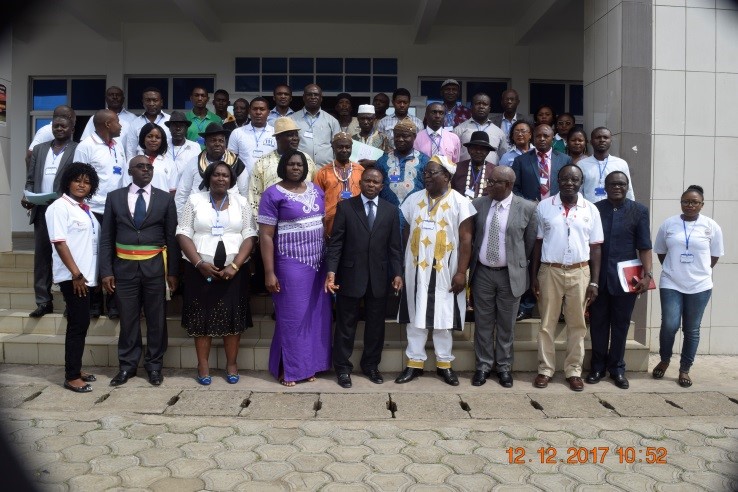