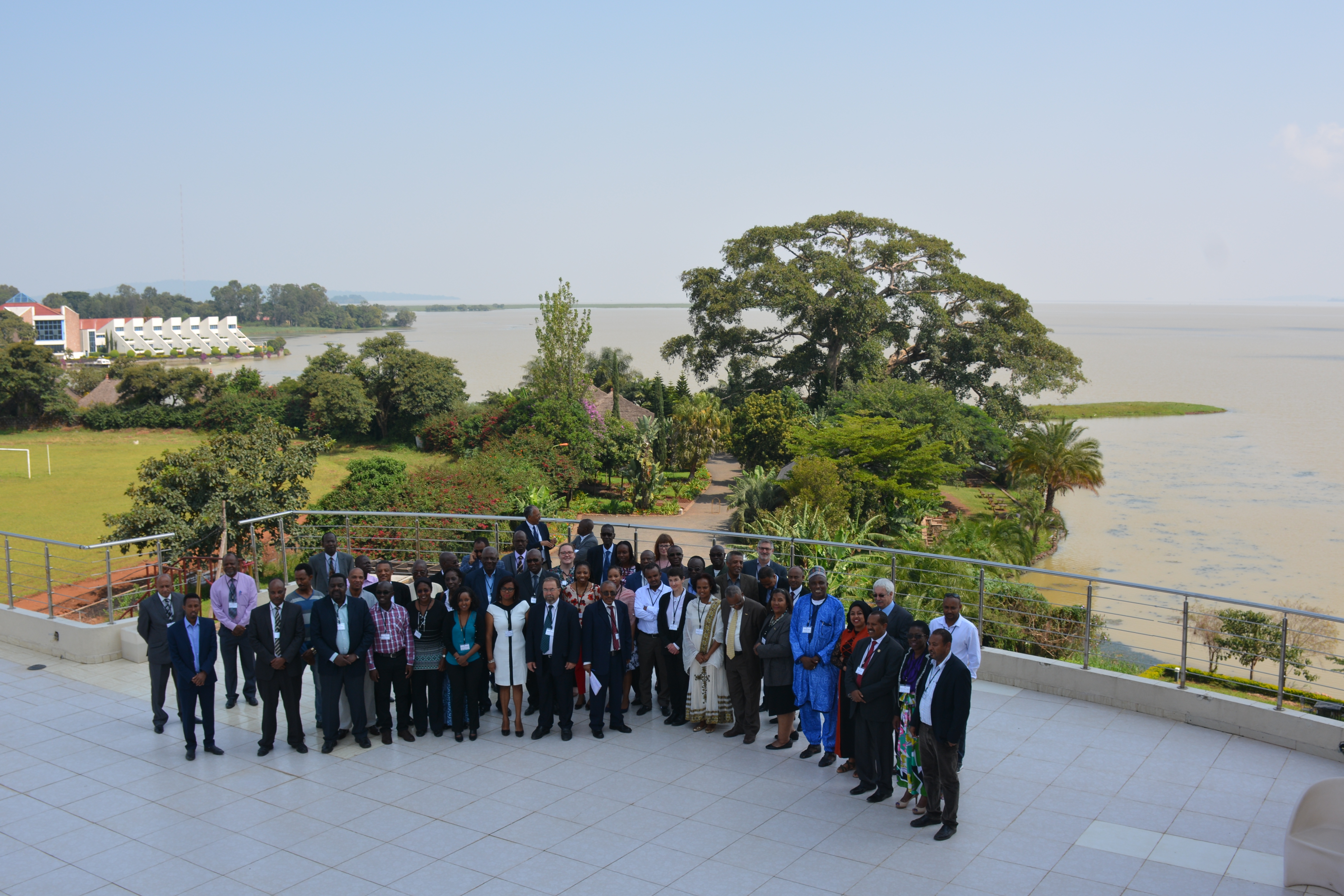 In its dual capacity as both the representative voice of the scientific and academic community on the African Working Group for Disaster Risk Reduction and as the International Centre of Excellence in Risk Education and Learning (ICoE REaL) for the Integrated Research on Disaster Risk (IRDR) programme, the Periperi U consortium convened its annual consultative meeting from 9-10 October, 2017 in Bahir Dar, Ethiopia. The event was hosted by Bahir Dar University (BDU), Ethiopia, through BDU’s Institute for Disaster Risk Management and Food Security Studies. It was jointly organised by the Periperi U secretariat (the Research Alliance for Disaster and Risk Reduction (RADAR) of Stellenbosch University, South Africa) and the International Federation of Red Cross and Red Crescent Society’s liaison office to the African Union and International Organisations. Simultaneous translation between English and French was generously provided by NEPAD and the World Food Programme.

The meeting sought to build on the momentum of 2015’s landmark agreements, along with insights from the World Humanitarian Summit, Habitat III,  2015 Sendai Framework and the 2017 Global Platform on Disaster Risk Reduction and discussions were guided by the Africa Union’s Programme of Action for the Implementation of the Sendai Framework for Disaster Risk Reduction 2015-2030 in Africa. It represented an organised response by Africa’s higher education enterprise to the cross-cutting call for increased attention to the reduction of risk, as well as the urgency to advance resilience as a cornerstone of sustainable development.

The meeting was attended by 60 participants, drawn from a diversity of institutions and organisations across Africa. This included representatives of Periperi U’s 12 members from universities in Algeria, Cameroon, Ethiopia, Ghana, Kenya, Madagascar, Mozambique, Nigeria, Senegal, South Africa, Tanzania and Uganda. As well as representatives from universities in Burkina Faso, Chad and Niger. Representatives from the  ICRC, IFRC, NEPAD, UNDP, UNISDR, WFP and WHO participated in the meeting as well as Ethiopian Government officials, including the National Disaster Risk Management Centre, and nongovernmental organisations such as Christian Children’s Fund of Canada. The two-day meeting was chaired by Dr Ailsa Holloway, Director of the Periperi U Secretariat, while Her Excellency, the AU Commissioner for Human Resources, Science and Technology, Professor Sarah Anyang Agbor provided crucial insight and guidance to the discussions.

The primary aim of the meeting was to unlock opportunities and mechanisms for closer collaboration between the continent’s science, academic, and higher education constituencies as well as those active in the humanitarian action and disaster risk fields. A critical component of this is the exploration of  new modalities of engagement to incubate and stimulate new talent and new forms of risk knowledge that align with Africa’s rapidly changing risk-scape.

The location of the meeting was particularly significant given the scale of humanitarian need shouldered by countries across the Greater Horn of Africa, including Ethiopia, during the 2016-17 drought, and continuing imperatives for relief and recovery. Its convening in Bahir Dar further underscored the prominent and recognised contribution that Africa’s universities are making in the Greater Horn of Africa and across the continent in building skilled human capital and robust risk knowledge.

The first day of discussions and presentations were divided into four successive panels. The first panel focused on ‘Framing the Conversation- Policy Dimensions’, drawing on global and continental perspectives of risk and resilience-building from the UNISDR, UNDP and the WFP. The second panel provided a ‘Snapshot of Africa’s Potential – Focus on Research Action’ which focussed on presentations by African academics and their recent risk related research. The third panel drew explicitly on Ethiopia’s extensive risk research experience, exploring the value of collaboration between universities and other stake-holders, and the influence of Bahir Dar University and Addis Ababa University’s academic programmes, research and community services in transforming Ethiopian society. The final panel focused on Emerging Collaborations between universities and other institutions, with particular emphasis on public health and food security concerns. 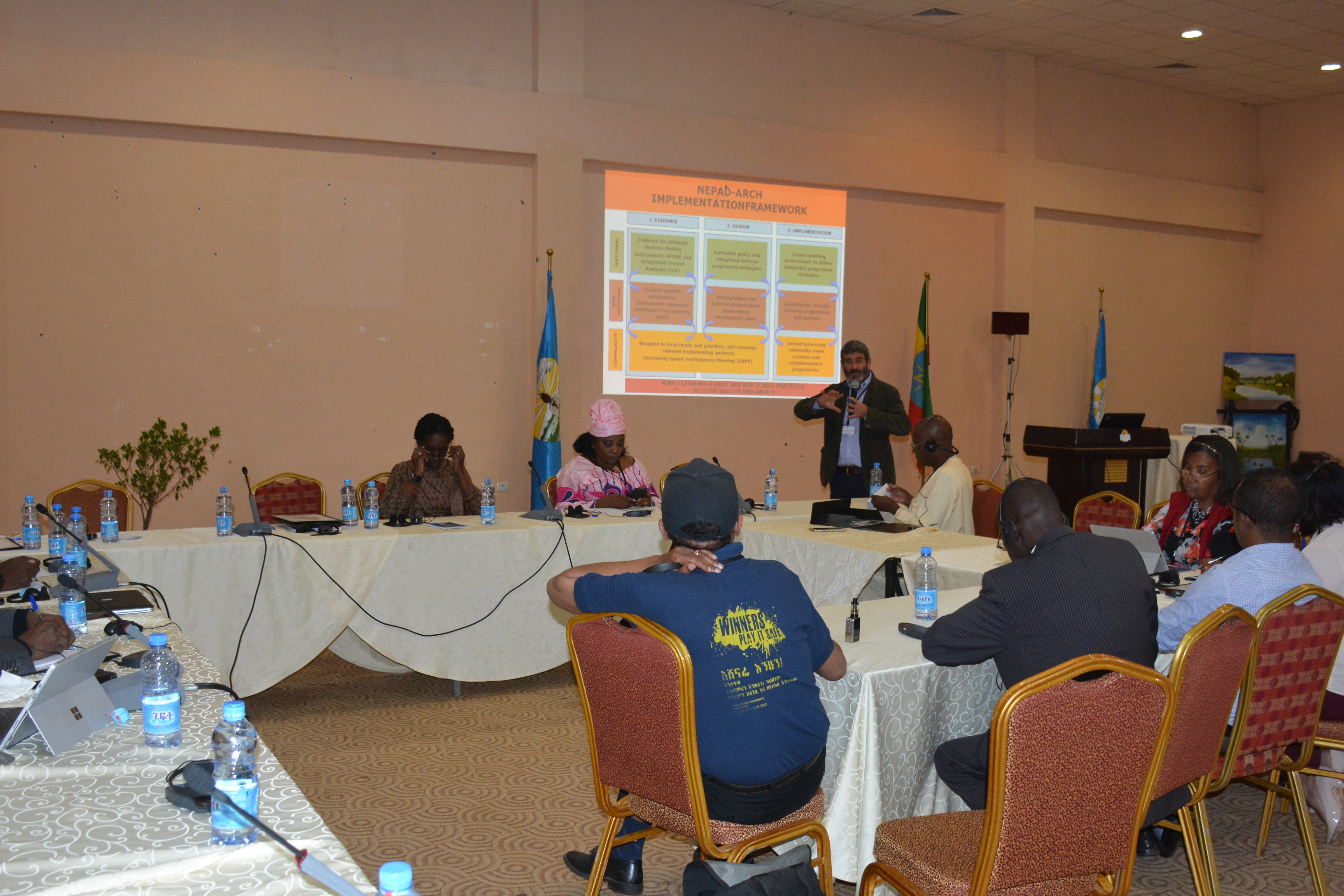 Following an opening synopsis of the previous day’s presentations and discussions by Professor Sam Ayonghe (University of Buea, Cameroon),the second day was opened by a keynote address by Her Excellency Professor Anyang Agbor, the Africa Union Commissioner for Human Resources, Science and Technology. She underlined the urgency for the Continent’s research and educational institutions to advance human capital and risk knowledge in the context of achieving the Sustainable Development Goals. She also stressed the need for strengthened capacity to realise the aspirations of the Sendai Framework for DRR, specifically the Africa Union’s Programme of Action for the Implementation of the Sendai Framework for Disaster Risk Reduction 2015-2030 in Africa. She highlighted the need for greater emphasis on risk reduction, underlining that an ‘ounce of prevention was worth a pound of cure’. 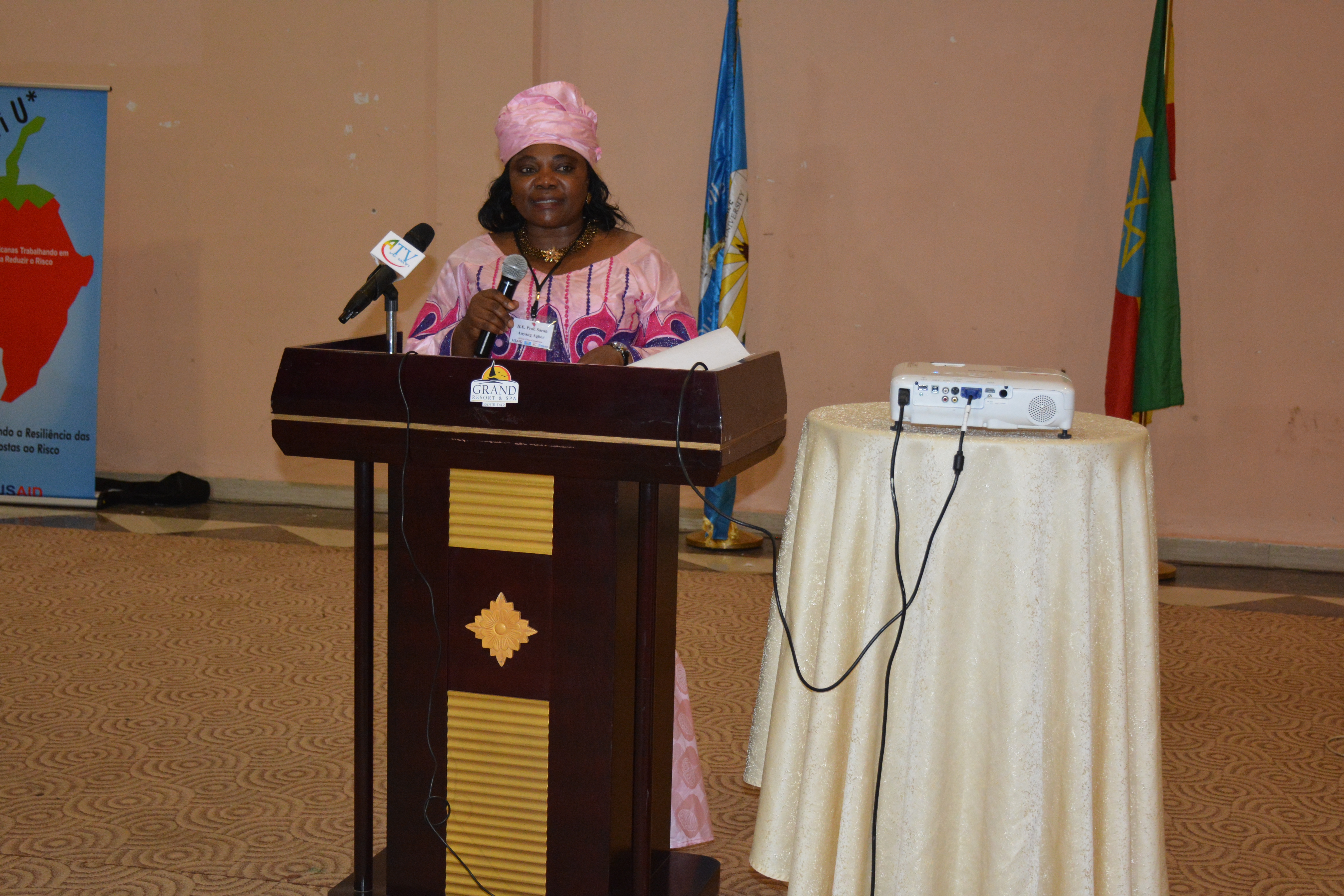 Each group was tasked to identify any 'burning' or 'hanging' issues that were evident in the first day of discussions as well as concrete examples/ cases (across all scales) where there was evidence of strong and successful collaboration between African academic/SnT institutions and government/ other organisations. Using this the groups were asked to identify opportunities/mechanisms that already exist at all levels which could/should be better mobilised to unlock collaboration opportunities for research, teaching and practice. Feedback from all working groups was then shared in a plenary session and included concrete ways forward to expedite these processes. 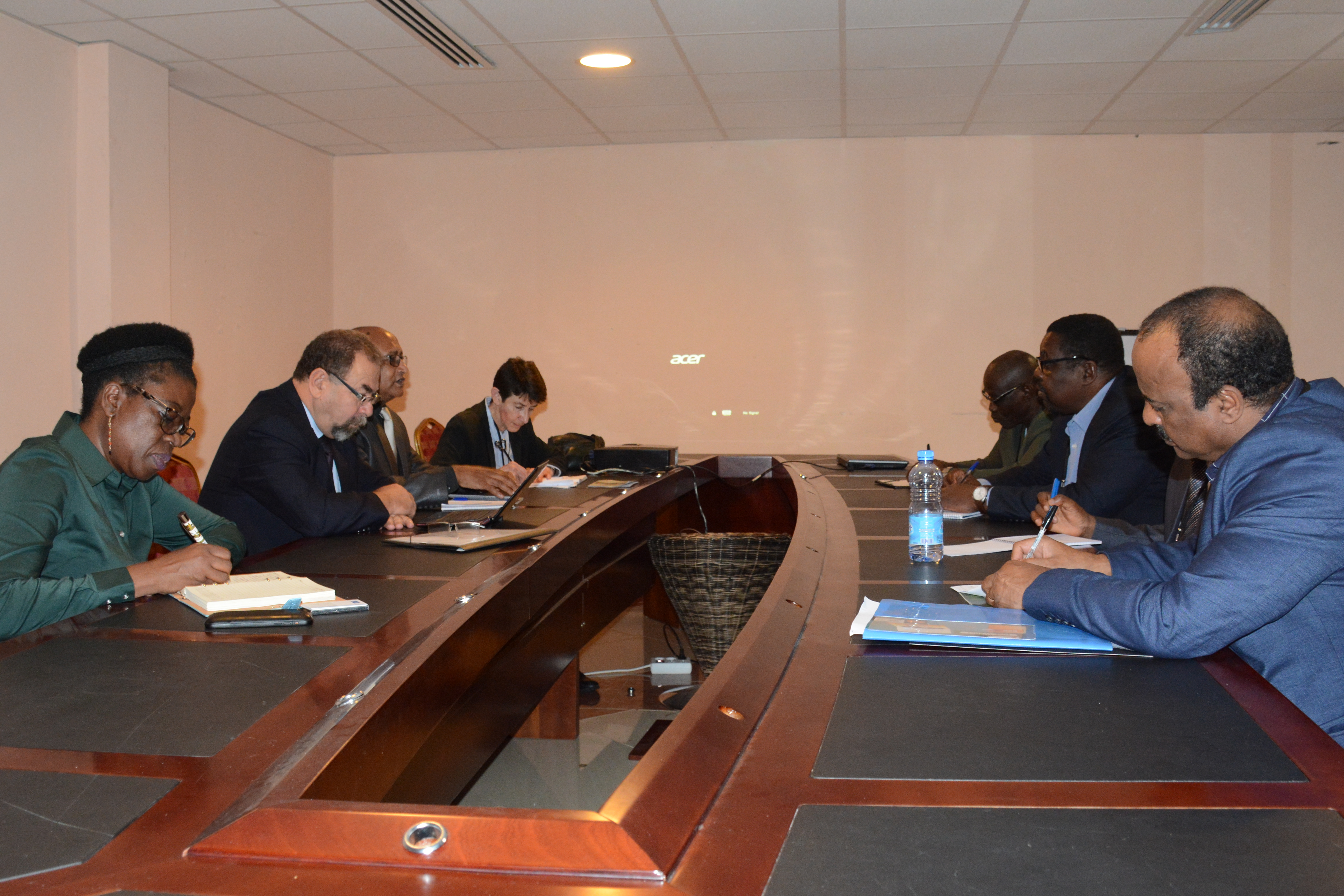 The following strategic and policy level recommendations resulted from the meeting, and call on the AUC (HRST) to take the lead in facilitating their implementation, including by integrating them into the report/resolution to be presented to the STC on Education, Science and Technology for consideration and adoption.

In the context of the Africa Union’s Programme of Action for the Implementation of the Sendai Framework for Disaster Risk Reduction 2015-2030 in Africa, it is recommended that:

The meeting concluded with the participants agreeing that there needs to be greater focus upon underlining the importance of stronger integration of indigenous and scientific knowledges in at-risk communities, and for sharing these insights more systematically. It is believed and hoped that the meeting provided the opportunity for new collaborations between institutions that could advance disaster risk knowledge production and use in better planning disaster risk management actions at all scales – especially at subnational and local levels.