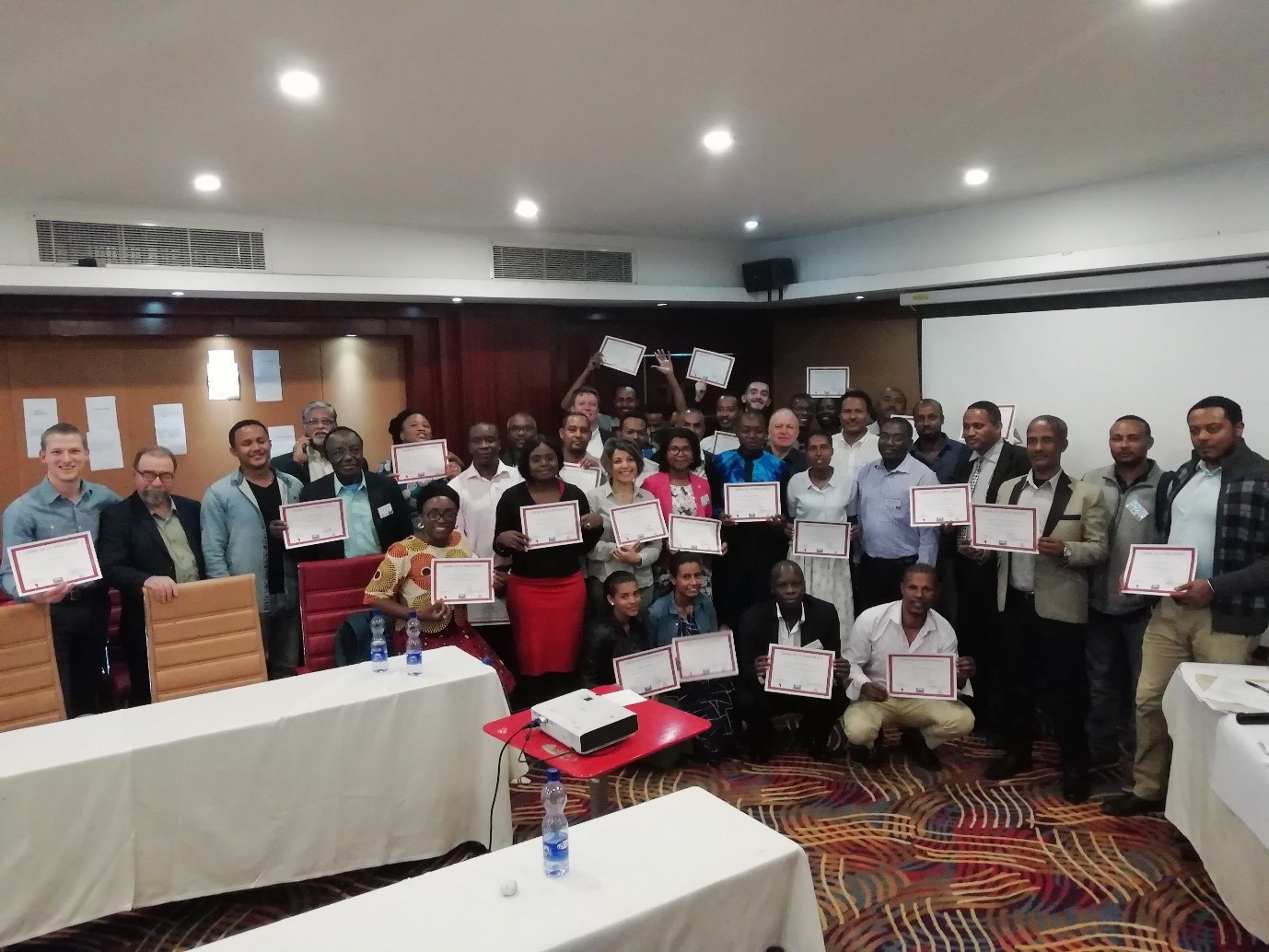 In total 30 participants along with nine teaching and administrative staff from Ethiopia and across the African continent took part in ARMS II modules. 18 of the participants were from Ethiopia, while the 10 African participants ranged from Algeria, Cameroon, Ghana, Nigeria, Madagascar, Sierra Leone, Uganda and Zimbabwe. Participants came from represented academic and research institutions, and public authorities (Ministry of Agriculture/Food Security/Irrigation, Ministry of Water, Ministry of Environment, Ministry of Energy), as well as the international development agencies such as the World Bank. The expertise of the participants varied including Disaster management, civil engineering, meteorology, risk analysts and consultants as well as a number of teaching and academic professionals from a variety or risk related fields. Participants were selected upon their online application forms and CVs which they provided when signing up to attend the ARMS. Participant applications were inspected and provided acceptance by the administrative and teaching staff of courses they had selected to attend.

Participants were obliged to take part in two of three modules offered by the ARMS organisers. The first module being a compulsory two introductory course to Disaster Risk, with participants deciding between one of two themed courses as their second module. The courses were designed for emerging researchers with an interest in the socially and intellectually compelling fields of disasters, risk and resilience. They were developed for PhD (or prospective PhD) students from Africa, as well as for managers, consultants and practitioners outside of academia who sought new perspectives in risk research and theory – to keep abreast of developments in the field.

From an interdisciplinary perspective, the courses are conceptualised to integrate the geophysical and social sciences. They intend to provide a two-way immersive bridge so that attendees with skill-sets in the physical sciences can strengthen their understanding of the integrated socio-economic and political consequences of such geophysical hazards on urban centres and communities. Similarly, students and researchers in the social science with disaster, resilience or risk-related topics can fast-track their understanding of geophysical processes and risks.

The first day of ARMS 2 began with participants registering and confirming their attendance for the training. Participants from outside Addis Ababa (e.g. International/African participants and those from Bahir Dar) were provided with their per diem, and compensation for visa fee. Participants also received a small 16 gigabyte Flash drive which had essential readings as well as their individual invitation letters and logistics note.

The opening ran approximately 35 minutes late as participants awaited the arrival keynote and opening speakers. The welcome address was conducted by Mr Tarekegn Ayalew (Bahir Dar University). Opening speeches were provided by Ms Ana Elisa Santana Afonso the director of the UNESCO liaison office based in Addis Ababa, and Mr Damene Darote, the National Disaster Risk Management Commissioner of Ethiopia. This was followed by two keynote presentations given by Mr Mathewos Hundie Tulu from the UNDRR offices in Addis Ababa, and Mr Tewodros Mulatu from the Addis Ababa City Government Fire department. 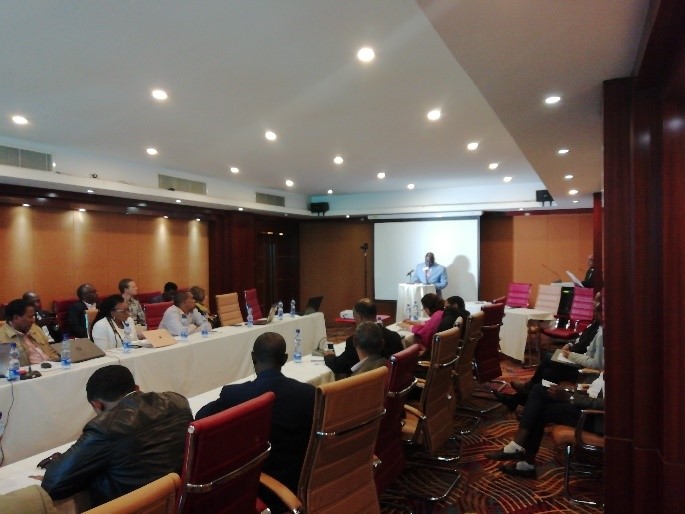 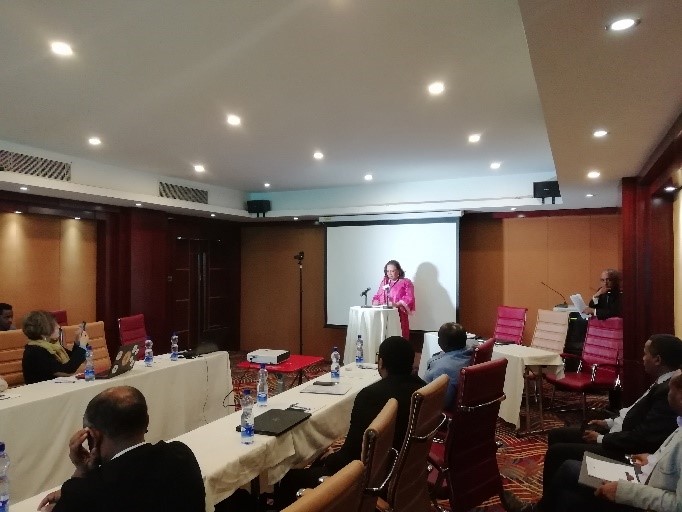 Once the opening session was concluded, the participants broke for a short tea break for 20 minutes to reconvene at 11:40 am to begin the first class session of the ‘Integrated Disaster Risk Reduction Science and Action’ module. This module was developed and taught by lecturers from Bahir Dar University. The first day sessions wished to establish the fundamentals of the disaster risk field, ensuring participants had a clear understanding of its paradigms and definitions, and their evolution over the last 30 years both globally and in Africa.

It also included a focus on integrating Disaster Risk Reduction, Climate Change and sustainable development, including Cultural Heritage, emphasising the importance of a transdisciplinary and pluralist approach to understanding disaster risk and development. Finally the class sessions ended with a class focused on examining and critiquing the role of science, technology and education for disaster risk management, particular in how science can be applied to inform policy, planning and implementation.

Towards the end of the second day, a seminar-styled session was hosted to discuss ‘Advancing skilled human capital for disaster risk reduction and resilience in Africa’. ARMS coordinators and teaching staff, along with a representative from Ethiopia’s National Disaster Risk management Commission were invited to sit on a panel and discuss on three themes;

Urban Geophysical Risks; the module began by focussing on introducing participants to disaster risk in an urban environment drawing parallels between global and African contexts. Through this they reemphasised the concepts of hazards, vulnerability, risk, risk reduction, and resilience that were introduced in the previous integrated risk module. The course went on to examine multiple geophysical hazards including; landslides, mudflows, sinkholes, earthquakes and volcanic activity that occur across cities and urban areas across the continent

Urban Hydrological Risks; the module began with the teaching staff laying out the objectives of a three day practical in which participants were to work in groups on applying what they had been taught during the course on hydrological urban risk to a city or settlement of their choice. On the last day participants were to present on this their chosen cities/settlements applying topics and themes raised over the course of ARMS to their fellow participants and teaching staff. The module continued with an introduction to Urban Hydrological risks by Mr Chapman who discussed principles of hydrology and hazards they may produce, particularly in urban areas. He then went on to identify factors/drivers which create vulnerability (e.g. urbanisation, poor urban planning, poor governance, etc), issues of exposure and resultant risks.

The fourth day of ARMS saw the continuation of teaching of participants between the two modules.

Urban Geophysical Risks; The course continued from yesterday with an examination of urban vulnerability and the socioeconomic and political impacts that geophysical hazards may have on cities. Prof Benouar gave a presentations on resilience and reducing geophysical risk, drawing on examples of seismic monitoring methods as well as insights of building earthquake resilient infrastructure from archaeological discoveries in cities Algeria and across North Africa. Prof Ayonghe drew on case studies of his centre work on involving landslides and volcanic activity in Cameroon, and his work with local city council in Douala on informed urban planning, earthquake engineering, and establishing the first standard building codes for the region.

Urban Hydrological Risks; on the second day of the module, Mr Rugai presented on aspects of flood modelling, particularly inundation modelling in urban settlements.  He introduced participants to LISFLOOD, which is a 2-D hydrodynamic model used for simulating floodplain inundation using GIS files and digital elevation models. He explained how such models could be used to identify and assess existing as well as potential future flood risk areas in settlements. 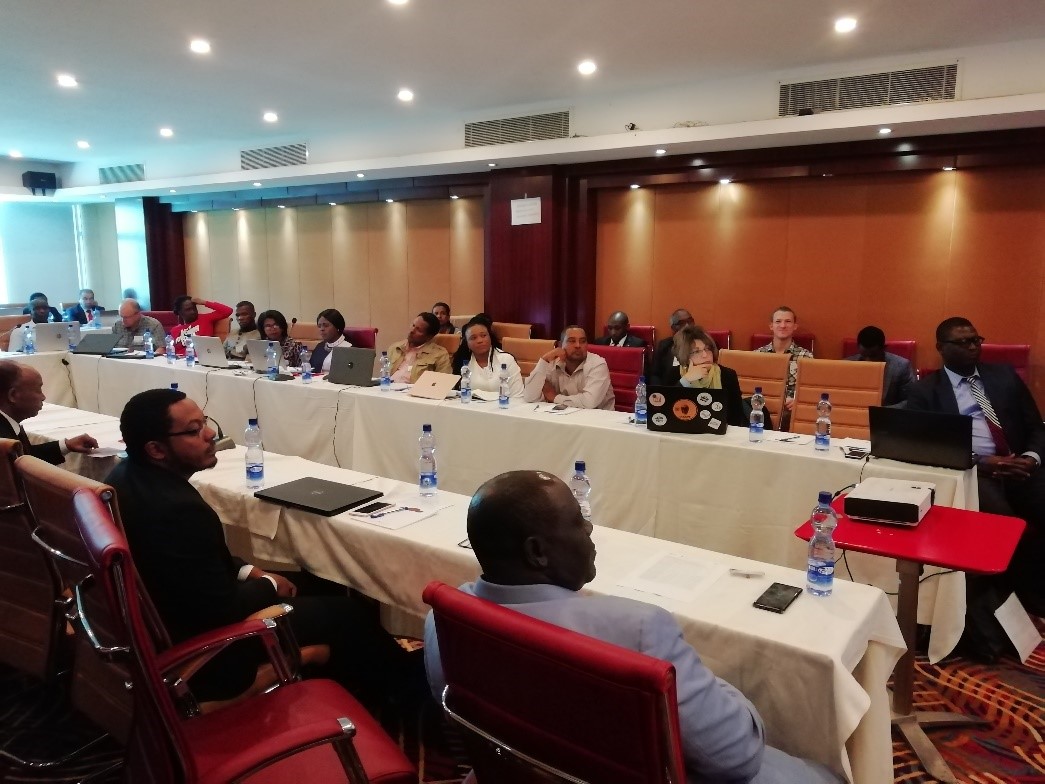 The fifth and final day of ARMs saw the continuation of teaching of participants between the two modules for until lunch time, in which the classes recombined to listen to presentations held by the hydrological class concerning examined hydrological risks in cities they had selected. The aim of this practical was to instil the participants with the idea that their own feed-backs and knowledge would require them to understand the material that was delivered throughout the sessions, and help cementing learning points and ensure attention was given by them to the presentation.

The ARMS training concluded at 15:30 with a closing ceremony in which students were presented with certificates for their participation and engagement in the ARMS courses. Teaching and organisation staff were also presented with certificates of appreciation for the time and energy they poured into making the course successful. A short speech was given by Dr Adane Tesfaye from Bahir Dar to thank the partners, Stellenbosch University, Bahir Dar University and UNESCO for their joint efforts into putting together ARMS 2. The final closing speech was given by Dr Jayakumar Ramasamy, the Head of Natural Sciences Sector for UNESCO in East Africa in which he reiterated thanks to the organisers for a successful ARMS training and wished everyone a safe journey back home.

If you wish to find out more about ARMs and the courses on offer please see the link.

[1] The first ARMS was held by Periperi U at Ardhi University, Dar es Salaam in Tanzania between 10 – 21 September 2018