Home News Dr Holloway representing Periperi U at the UN 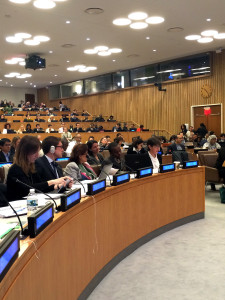 Dr Holloway representing Periperi U at the UN

23 April 2015, Dr Ailsa Holloway from Stellenbosch University South Africa, represented Periperi U as she took part in an ICSU (International Council for Science) delegation for a series of meetings at the United Nations headquarters in New York City.

The meetings took place as sideline events to the Intergovernmental negotiations on the post 2015 Development Agenda. During the negotiations, Dr Holloway delivered the following statement to the interactive dialogue with major groups and other stakeholders